Tura New Music announces The Sonus2 Tour featuring Kimberley singer-songwriters Olive Knight and Stephen Pigram with a cross-cultural ensemble of instrumentalists, Iranian percussionist Esfandiar Shahmir, cellist Tristen Parr and flautist Tos Mahoney. The touring artists are renowned in their own right and now come together for the first time to present a wealth of original, new music as well as captivating collaborations with local artists.

Sonus2 is a meeting of cultural forces, ancient and contemporary, through songs of outback Australia and newly commissioned music for the tour. New songs, new works, and new arrangements feature in a program reflecting the Kimberley communities and landscape travelled through. Tura presents this cross-cultural journey weaving a rich tapestry of uniquely Australian music, celebrating the sounds of the Kimberley.

This Tour, as with all of Tura’s award-winning Regional Programs, has come about from 19 years of community engagement and deep relationship building.

Tura acknowledges the Traditional Owners of country throughout Australia and their continuing connection to land and community. We pay our respect to them and their cultures, and to their Elders past, present, and emerging. 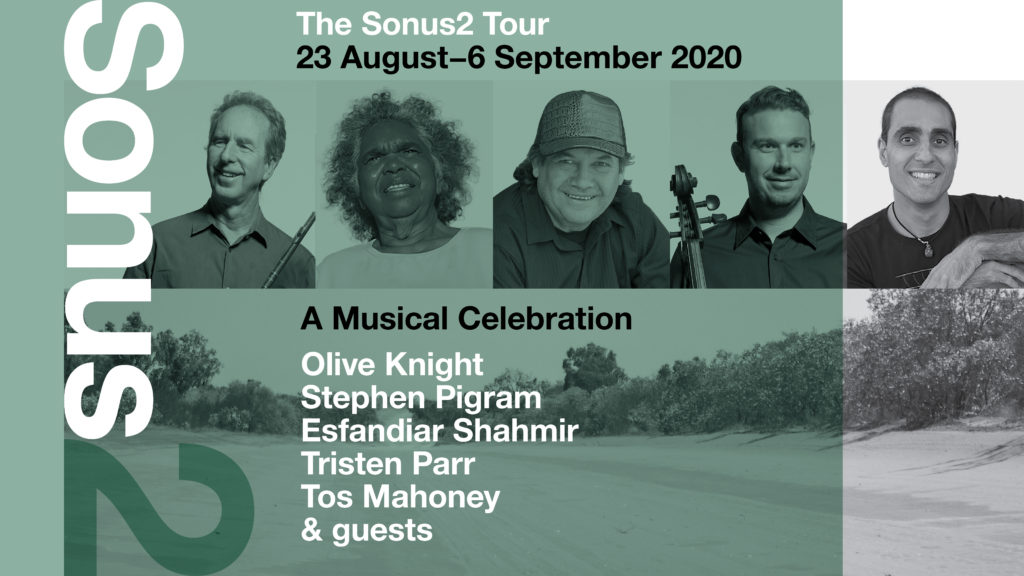 Olive Knight (Kankawa Nagarra) is a Walmatjarri Elder, international blues and gospel singer-songwriter, teacher and mentor, human rights advocate, and political activist. In 2015, Olive released her third album ‘Heroes and Laments’ and last year returned to the stage to tour internationally with Hugh Jackman in ‘The Man. The Music. The Show.’

Olive is joined by Stephen Pigram who has been collaborating with Tura since 2006. Stephen has been described as the ‘the king of Kimberley song’ for his over thirty-five years of composing and performing both solo, and as part of the Pigram Brothers. Stephen and Olive share a devotion to the preservation and sharing of Aboriginal language and culture, and the Sonus2 Tour is an opportunity to collaborate through the Kimberley with local artists in a celebration of culture and place.

In 2020, Olive and Stephen will be joined by Iranian instrumentalist Esfandiar Shahmir who plays the Persian daf (frame drum) and other percussion interlacing his ancient and cross-disciplinary sounds with their songs of country. The ensemble also features cellist Tristen Parr and Tura Artistic Director and flautist Tos Mahoney.

Most significantly, the collaborations along the Tour shape and sculpt the performances. Performing alongside, or in part with, guest artists such as  famed Fitzroy Express founder and leader Danny Marr, the concerts present a showcase of local sounds and distinctive flavour. Tura’s Sonus2 Tour also features special performances by local dance and song groups, like the Waringarri Performers in Kununurra. This equal exchange of music and knowledge has formed a dialogue centred on artistic collaboration, bringing a platform to communities to celebrate the sounds of their country. More local artists to be announced before Tour start date.

Read more about the artists

The Tour weaves through the Kimberley with community concerts in Kununurra, Warmun, Halls Creek and Fitzroy Crossing, up the Peninsula to Kooljaman, Djarindjin, Lombadina, One Arm Point, and Beagle Bay, before ending in Broome at Sun Pictures, as part of Shinju Matsuri’s 50th anniversary.

The Tour will engage with communities through a schools workshop/presentation program which will deliver primary and high school students content from the tour, the expertise of all the artists, interactive processes, and performance with music students. Tura is delighted to be partnering with Healthway to promote to Act-Belong-Message throughout the Tour.

The 2020 Sonus2 Tour is curated and produced by Tura New Music.

The 2020 Sonus2 Tour is supported by the Government of Western Australia through the Lotterywest COVID-19 Relief Fund, Healthway promoting the Act-Belong-Commit message, and the Rowley Foundation.